Can we grant the children their freedom? 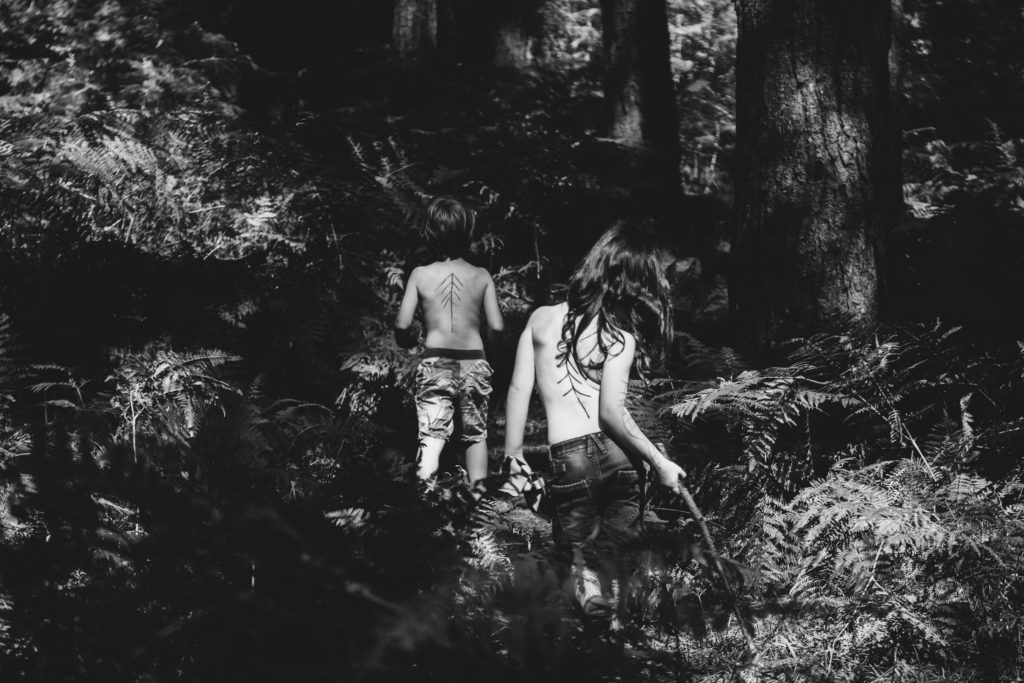 “Your child is as free as possible. Let it go and listen, find and fall, stand up and be confused.” J.H. Pestalozzi (translated)

When I think about my childhood, I remember that I mostly played outside. We roamed through bushes, climbed trees, played hide-and-seek between the garages in the courtyard or got over our fears by going on an expedition through old ruins.All of this we never did with any of our parents or grown-ups. It was quite the opposite, we spent most of our time with the neighbor’s children, friends or relatives. We were all of different ages, some older and some younger.

We either came home when we were thirsty or hungry, or when the street lights went off. Of course, we were also at times outside with our parents or grandparents, however we had the freedom to not constantly be observed and watched over, which was good as how were we able to test out limits and fears when our parents always watched over us. In order to protect us, our parents or guardians would have never allowed some of the things we did.

This aspect of childhood development is something that the neurobiologist Gerald Hüther as well as the pediatrician  Herbert Renz Polster wrote about in their book: “Wie Kinder heute wachsen – Natur als Entwicklungsraum“.

Nowadays children are always being observed, either in the nursery school or together with their parents on the playground. There are always adults present to protect and guard their children. When do we give children time and space to develop freely without being constantly observed?

Of course, many will argue that there is danger as well as the responsibility one has to supervise the children etc. There are many reasons for this, which are cited in this claim to freedom, which I shall discuss later in detail, also in regard to the legal basis which educators have to follow by. Firstly I would like to point out important aspects of children´s development as well as its wonderful benefits which comes to being in nature:

“A young person needs his equals, these being animals as well as the various elements of nature: water, dirt, bushes, free play. One can grow up without all of these such as with stuffed toys, carpets, asphalt street and courtyards. The child will survive, however one should´t wonder how the child never learns basic capability in social skills, like a feeling of belonging to a place and initiative.” Psychoanalysist Alexander Mitscherlich (1965, S. 24f.) (translated) 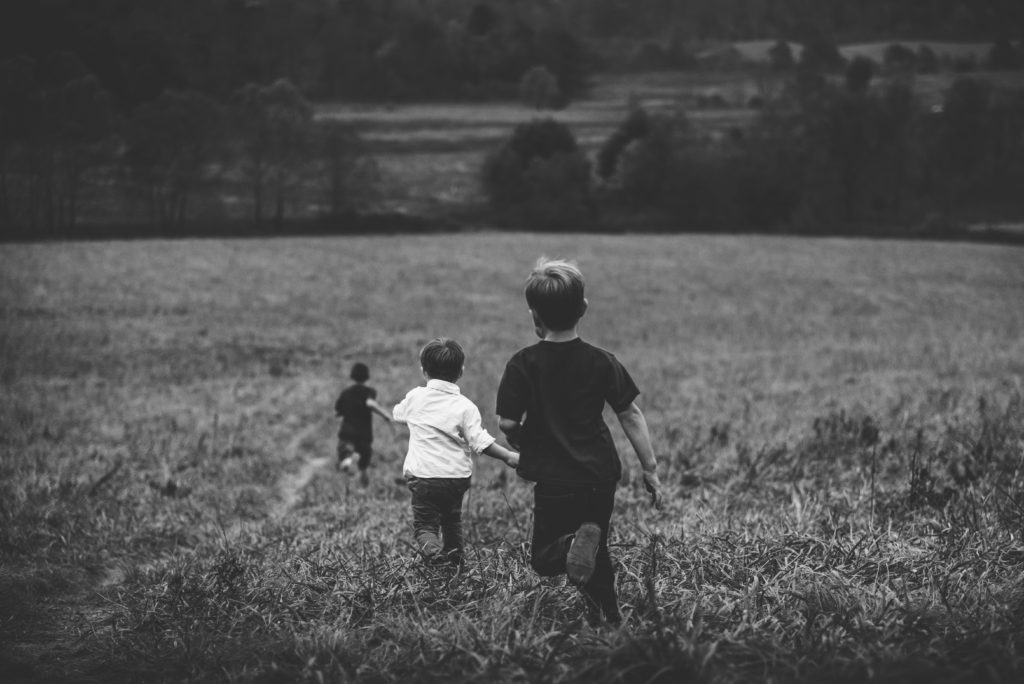 The following important aspects are pointed out by Gerald Hüther and Herbert Polster Renz 2013):.

Ulrich Gebhard (1998) even mentioned then, that in children´s exploration and urge to discover things, also destroy plants, such as pulling out flowers or sticks however “nature is able to handle this use”.

When I was working as an educator a few years ago, I also thought that children shouldn´t pull out plants in order to protect nature. However, I then came to believe that children should be allowed to experience positive things in nature in which they will later have memories of also valuing and protecting nature as well.

“In a world under regulations of parents and carers […] characteristics remain on the track, as we commonly associate them with successful people. These qualities include […] autonomy, self-determination, self-responsibility, mastering risks, imagination and creativity, creative thinking and spontaneous relationships to people and other beings in the world. […] It should give us the impression that we are calling for the qualities mentioned, but that we increasingly block certain areas in which children can find themselves on their own: the spontaneous nature, the free play in the wilderness Unplanned, uncontrolled time.” (translated)

In theory, this all of course sounds a lot easier than it is in reality. Often I ask myself how much freedom and trust one should give to children.
I often stop, reflect on how I have enjoyed the freedom as a child and could have free play. But as an adult, I am often plagued by fear, such as what if the child gets injured, disappears, runs away, etc. In addition, the social pressure, the different opinions of parents, education facilities, the personal responsibility and knowing all the sort of things that can happen.

So what do I do about this?

first and foremost, every basis of trust and supervision is always at the discretion of each person. Everyone must be aware of their own responsibilities. However, it should be noted that our fears are not only projected on our children, but also prevent them from developing their evolutionary games, discovery, exploration which is all suited for their own needs. How should they learn to deal with danger if they are not allowed to know their limits? I also tend to want to protect them, but it is much better when children know themselves what they are capable of.

Children are in less danger than they used to be, there are less kidnaps and abuse. Also the feared diseases from ticks, remains within certain limits. The nervous system is affected by 40 cases of under 15 year / year and only 10 cases / year. Usually, it is mild and without serious complications. For every 20th child, borreliosis pathogens can already be detected in the children´s immune system, however only one out of 10 cases is harmful to the immune system and usually only the skin is affected. (vgl. Renz-Polster & Hüther, 2013).In comparison to this, every 30th child develops an addiction to computer games. Every 15th child suffers from being overweight and every 10th child suffers from mental health issues. (vgl. Renz-Polster & Hüther, 2013) In addition to this, the pedagogue and psychoanalysis for children and youth point out, that “sitting” can have detrimental repercussions especially in comparison to when children can play in nature. These are: obesity, diabetes, high blood pressure, heart attack and lack of vitamin B. (vgl. 2013)
So on from these dangers there is also a law for the educators duty of supervision

In my work, I have often experienced very fearful colleagues who every second keep an eye out for the children. Of course, I do understand these arguments for example that parents complain about every scratch their child has and that one is under law to supervise the children. They also point out that parents like to give the children this freedom, but we as educators, do not want to take that risk. The problem is that a lot of the children spend most of time in the day-care center and then only have very free time with their parents in which they could pursue their urge for freedom.

What does the law says?

Since I myself am an educator and not a lawyer, I have come to the following statements from my research.
In the pedagogical work, we are subject to personal care (§1631 Abs.1 BGB) which are transferred to the responsible body by  contract . Which in turn transfers the personal care to its employees, ie the educators. This duty of supervision contains that the trusted person:

However, it must be pointed out that there is no direct legal basis governing the exact content of the supervision. On the other hand, the legal consequences of a breaking the duty of supervising the children are regulated by law (vgl. Juraforum, 2017).

To a certain degree, supervision relies on certain conditions:

To summarize these points mentioned about supervision, they all depend on certain situations and how the rules are in these given moments:

If the duty of supervision is violated, then there are consequences in the civil, criminal or labour law.

“For example, the District Court of Munich, has ruled (AZ 262 C 20011/06) that there is not a  particular violation in the duty of supervision when a child stumbles over a toy and hurts themself in the day- care center. This could also fall under the general risk of life.” ( vgl. Advocard, 2016) (translated)

So, I had hoped that with an understanding of a legal basis for supervision would bring more clarity as well as relaxation so that the pedagogical work could be shown with less anxiety. However, for me personally, there was no such revelation for me. Nevertheless, I would like to try to let the children experience more freedom. As already stated at the beginning, it is in our own judgement and responsibility how much trust and freedom can be given to children.

In addition, during my studies the pedagogue and paediatrician Janusz Koorczak wrote a book called: „How to love a child“ (1919) which is valuable for self-reflection in these topics of childhood

“I claim the Magna Charter Libertatis, as the basis for the laws for the child. Maybe There are others – but these three-fundamental rights I have found:

When I think, and reflect back to my adolescence, I survived all the risks that I have experienced as a child without having serious injury or permanent damage. I’ve never lost an eye or someone elses while playing with sticks. I may have had a scratch here or there, or hurt foot, surely many tears have been shed, but in the end I most importantly I have learned about my own limitations, abilities, freedom. I have evolved from these experiences.